Montevideo is the capital and most populated city of the Oriental Republic of Uruguay. It is also the headquarters of Mercosur and ALADI. It was the eighth most visited city in Latin America by foreigners in 2013. It has been consistently rated as the city with the best quality of life in that region in 2015, since it has been maintained every year since 2006

In 2015, its metropolitan area has a GDP of US $ 40,500 million, and a GDP per capita of US $ 24,400; becoming the metropolis of Latin America in the nineteenth largest, and the ninth in terms of purchasing power per capita. By 2025, a growth of around 50% is projected. Tourism is very important in Uruguay and also in its capital, Montevideo. It has a varied offer that includes historical walks, nightclubs, beaches, and agricultural tourism (tourist stays, wine cellars and farms) in its outskirts. 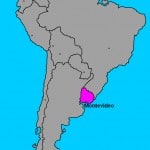 We carry out removals in maritime containers to Montevideo, Uruguay Dismantling of furniture, packaging of all furniture with plastics and cartons, customs procedures, montevideos map port taxes, personalized advice. Urgent shipments of suitcases and boxes by plane.

Most of the tourists that receive are from Argentina, Brazil and Europe, and the number of visitors from the rest of Latin America and the United States grows year after year, thanks to the increasing arrival of international airlines to the International Airport of Carrasco and luxury cruises to the port of Montevideo.

The city of Montevideo is the cradle of tango, candombe and Uruguayan murga, and has various activities related to these musical styles. In Montevideo there are many options in this regard, with a significant number of rooms with a wide range of shows ranging from experimental film to commercial films that are exhibited around the world.